I founded Lotus Belle tents in 2012 after becoming a single mum. Initially I was told that my design concept was pointless and would “never amount to anything.” I am so happy that I eventually decided to ignore this and follow my dream.

This is my story.

For my tenth birthday my parents bought me a Vaude dome tent which I absolutely loved. I used to pitch it in our back garden and sleep in it every night throughout the summer. To me there's nothing better than the sense of freedom I get from being outside, I feel really happy being close to nature. Also having a small space that I can keep really clean, and knowing where all my belongings are, makes me feel secure and safe.

I have often felt like I was born in the wrong millennia – I think I would have preferred to be a hunter gatherer living in a tribe. Something in me wants to return to that simpler way of living, to exist using space and resources as efficiently as possible.

When I was sixteen I made a Mongolian style Yurt using sticks from the hedges around my parents’ house. I loved the Yurt because it was really cosy, sturdy and that you could just about stand up in it. However it took up all the space in my car so wasn't ideal for camping trips. 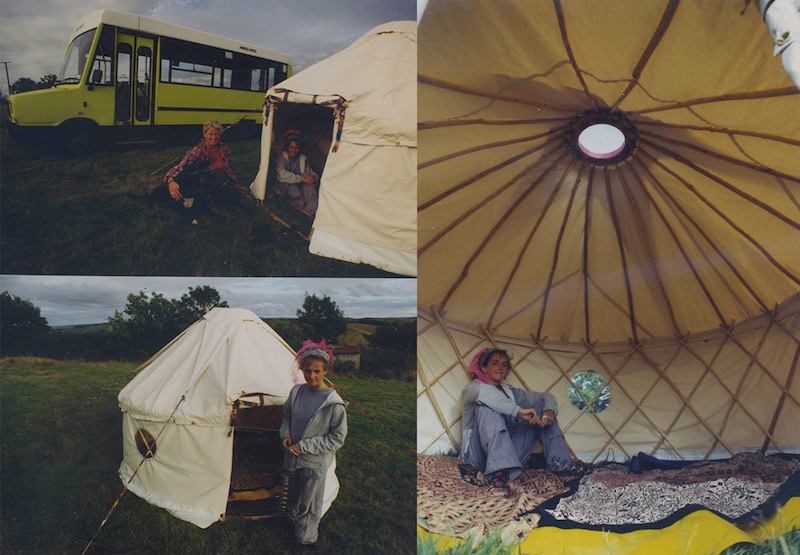 I went to Falmouth uni and spent the years of my degree living right on the coast of Cornwall in a mini-bus that I’d converted.

I had a dyslexia budget that enabled me to buy tons of books about sustainable building, tree houses, geo-domes and other types of portable structures. I poured over the books and kept little sketch pads for my own ideas.

I liked to design all sorts of, what would now be known as, ‘tiny homes’ I also sketched out ideas for lots of different types of tents.

The time I spent living in my Dome tent and in my Yurt inspired the subject for my dissertation which was titled ‘the importance of circular space.’ I found there were many positive reasons for living and spending time ‘in the round.’ Amongst other factors, it promotes equality and communication as everyone can sit an equal distance from the centre and face in towards each other.

I also owned a bell tent which i would take on camping trips whenever I had the chance. I loved the look and feel of canvas and was especially taken by the simplicity of the design, how quick and easy they are to pitch and pack away. 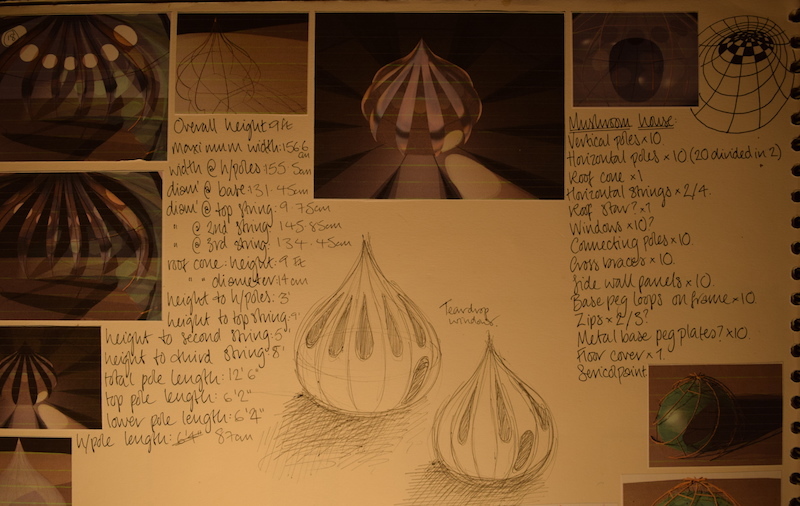 After this, my sketches became focused almost exclusively on circular designs that would fuse together the roomy aspects of Yurts with the ease and portability of Bell tents.

Several different tent designs began to take hold in my sketchbook, mostly tending towards organic shapes. Not all of them were entirely practical. At the time my lecturers said they were pointless.

However, for me, the Lotus Belle, or Onion Dome as I had originally called it, had something special about it and seemed to want desperately to get out of my sketchbook and into reality.

I left uni with a 2/1 somewhat disheartened, feeling that my designs for the ‘Onion Dome’, would never amount to anything. I thought I'd better get a sensible job. So I did a PGCE course and took a position as a textiles teacher at a secondary school in Weymouth.

My passion for tent making started to creep back into my mind and I found myself encouraging students in my class to design and prototype one-man tents.

I was twenty three when I had Mani. Then just before Jago was born I became a single parent. Life got tricky. Looking back, however, I'm grateful because the desperation of those times forced me to rethink my path and set me on the course to where I am now. 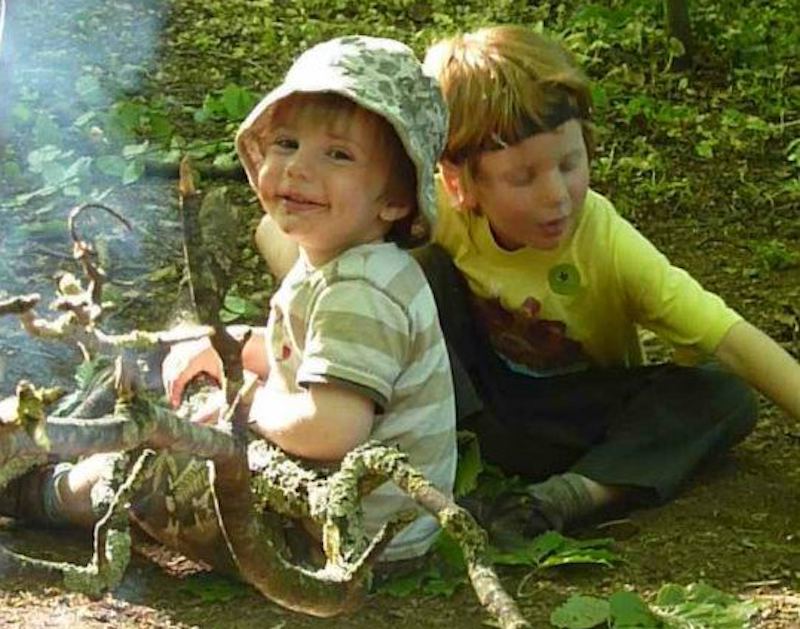 I quit my job in Weymouth and moved to Bristol so that I could live near to my friends and because I thought I'd be able to find a part time teaching job. Turns out teaching isn't compatible with being a single mum, unless you want to spend more on childcare than you earn on the job. So I worked from home doing typing work. I'm enormously grateful to the tax credits system, as it was then, which supported me and my family and afforded me the time and space to start my business.

Along came this thing called Glamping, which totally changed the rules of what was required of a tent, my ‘Onion Dome’ suddenly seemed viable. Glamping wants spacious head height, high quality materials, an overall luxurious feel, and isn’t so bothered about packed dimensions, weight, or price tag.

I revisited my tent sketches about 6 years after I’d initially drawn them. I contacted the man who I had originally bought my bell tent from, because at the time they were regarded as the best bell tents on the market. He seemed very impressed by the concept and invited me to meet his factory where we could get a prototype made.

It was a long process. We went through several incarnations and had to make lots of revisions. With a little help from my family and friends, I managed to simplify the design to arrive at a workable model. 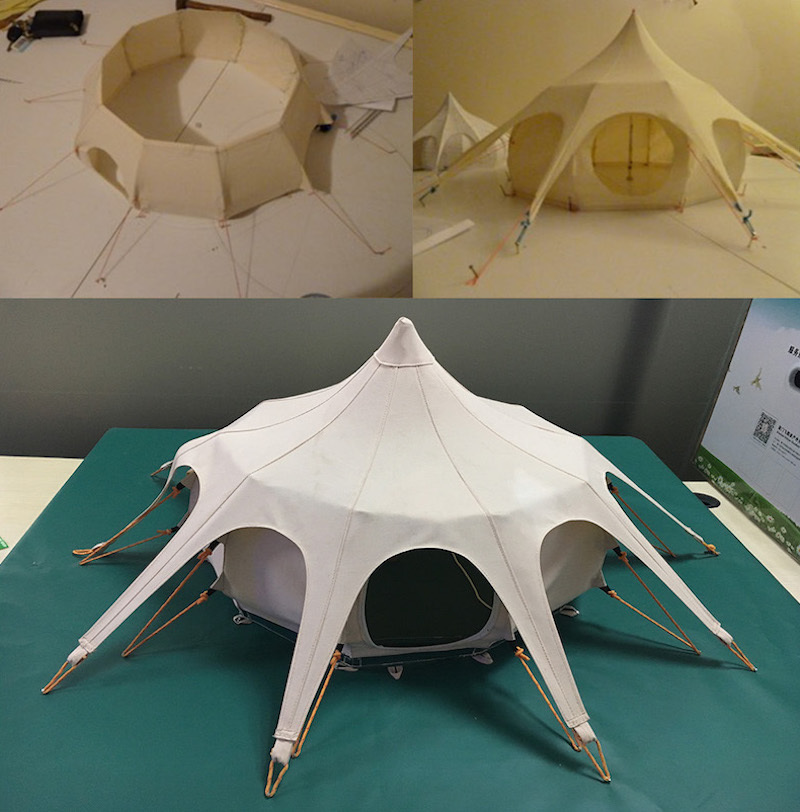 I literally wagered my life savings on getting the first run of twenty tents made. I was so worried I’d made a terrible mistake. It occurred to me that I had done no market research at all. All I knew was that I liked it myself, so I hoped other people would too. I hardly slept for the six months while they were being made, constantly worrying that they wouldn't sell.

When they arrived, I took one to Camp Bestival. I set it up on a main thoroughfare. Everyone that came past was intrigued saying they hadn't seen anything quite like it before and seemed genuinely impressed, with the exception of one lady who declared that it was "disgusting". I quite liked that. At least it evoked a strong opinion! I chatted to hundreds of people throughout the festival and amazingly got seven orders placed within a week. 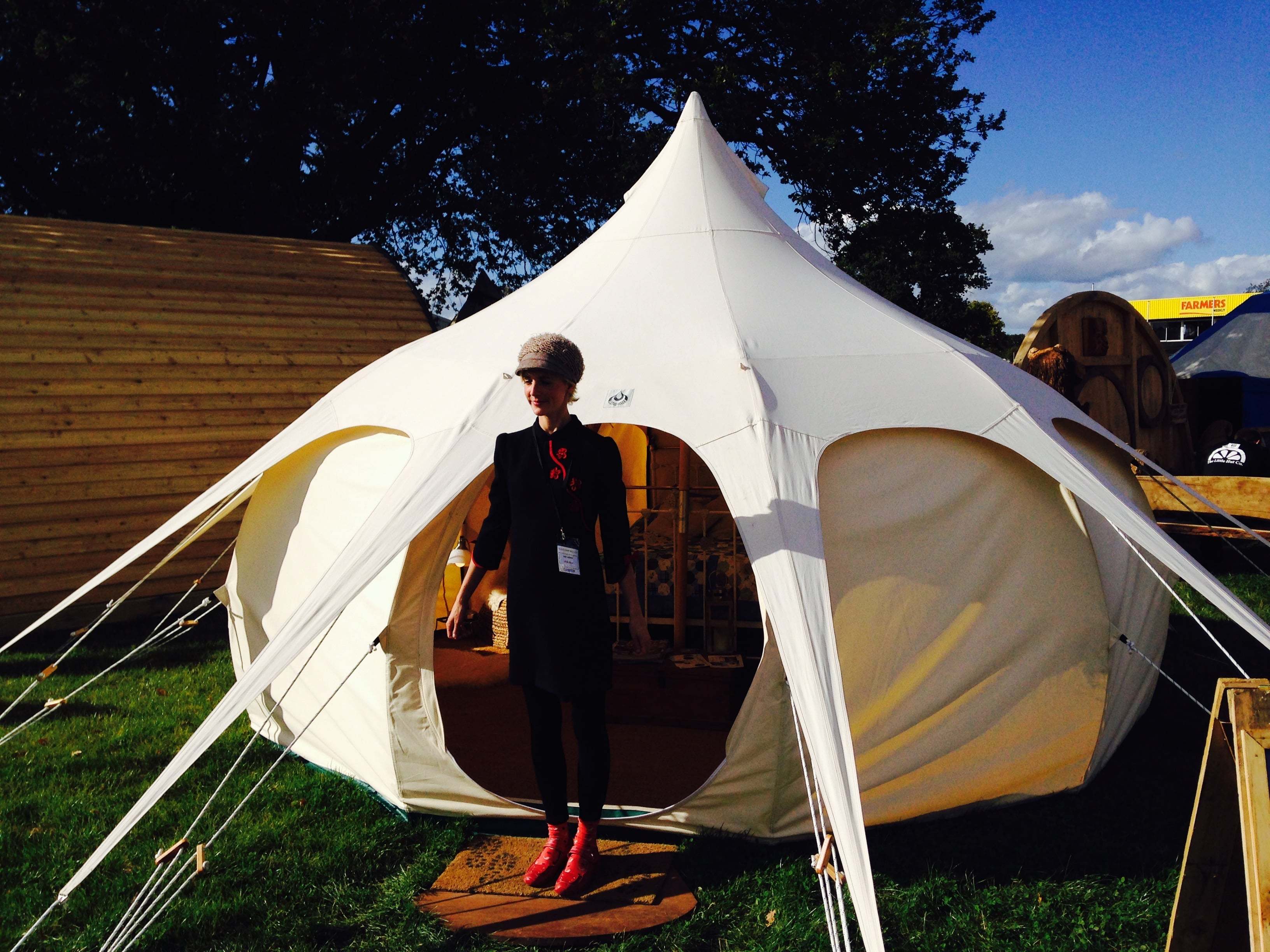 Although I sold all of the tents in the first years order it was still stressful and I didn't make enough money to live on so I considered going back to teaching. Then an order for 50 tents came along in one go and a couple of months later Jess in New Zealand ordered 12 (which she sold immediately). Before I knew it I was ordering over 100 tents on pre order. That was 2012, since then things have grown pretty much exponentially.

I am eternally grateful that the rise of Glamping coincided so exactly with the arrival of my Lotus Belle idea, the two have become synonymous. Campsites and festivals started to offer pre-pitched tent packages, including bedding and mod cons etc, for people to rent. I am so pleased that businesses have seen the value in my design. It’s good because it makes me feel like maybe I was born in the right millennia after all! 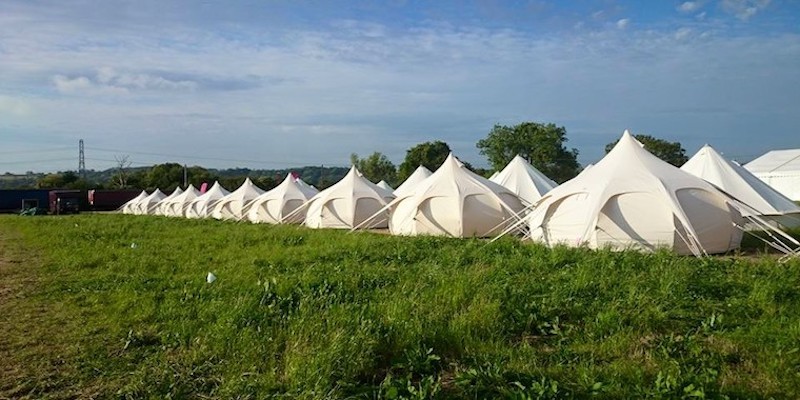 In the last couple of years (and after another baby, the beautiful Elowen) I've had the time to get back to what I really love, which is design. I have been able to create several new exciting products like the Air Bud and the Lotus Mahal as well as lots of accessories and innovative new features to the original design like the Stargazer roof system and the Cocoon / Insulated linings.

We now have over 50 products with distributors in New Zealand, Australia, the USA, UK, France, Germany, Canada, Austria, Korea, and Taiwan. In 2017 worldwide sales reached over 1000 units. 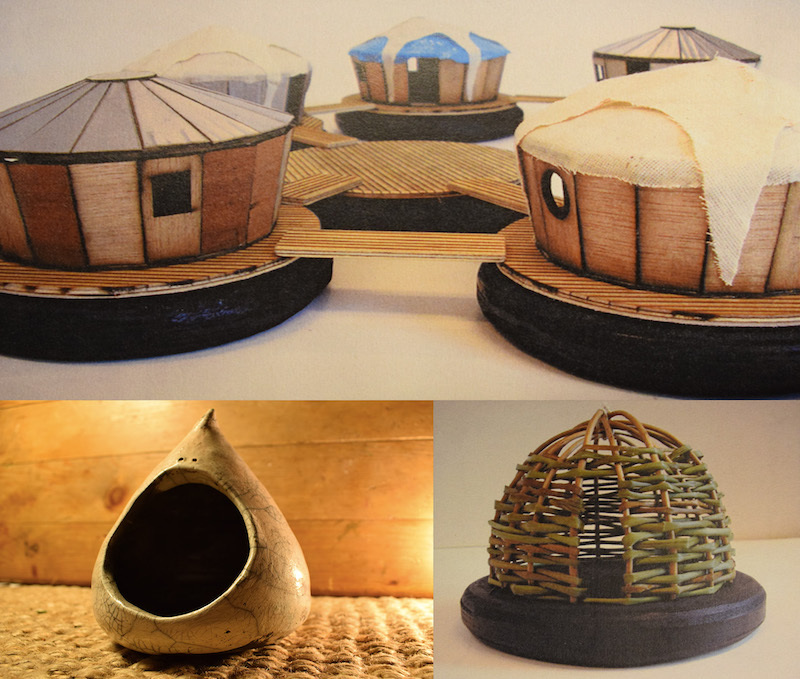 Looking back at everything i made during my childhood, from wicker and balsa wood models to pottery class and modern art projects you can really see the proto Lotus Belle shape coming to life. 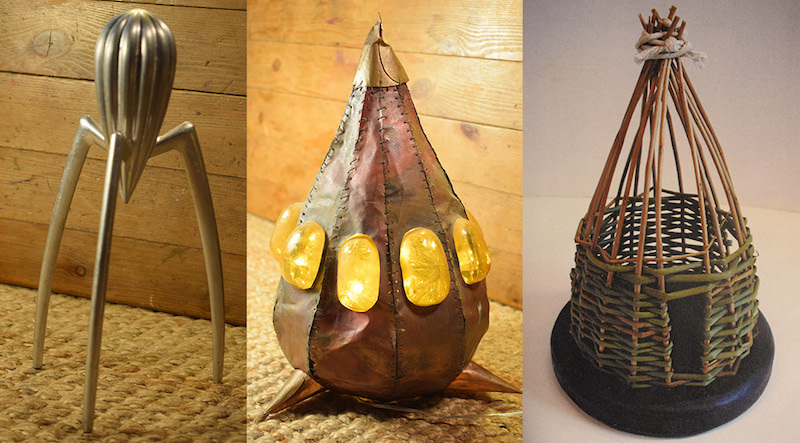 My dad always said “if you design something good, people will beat a path to your door,” and they did!