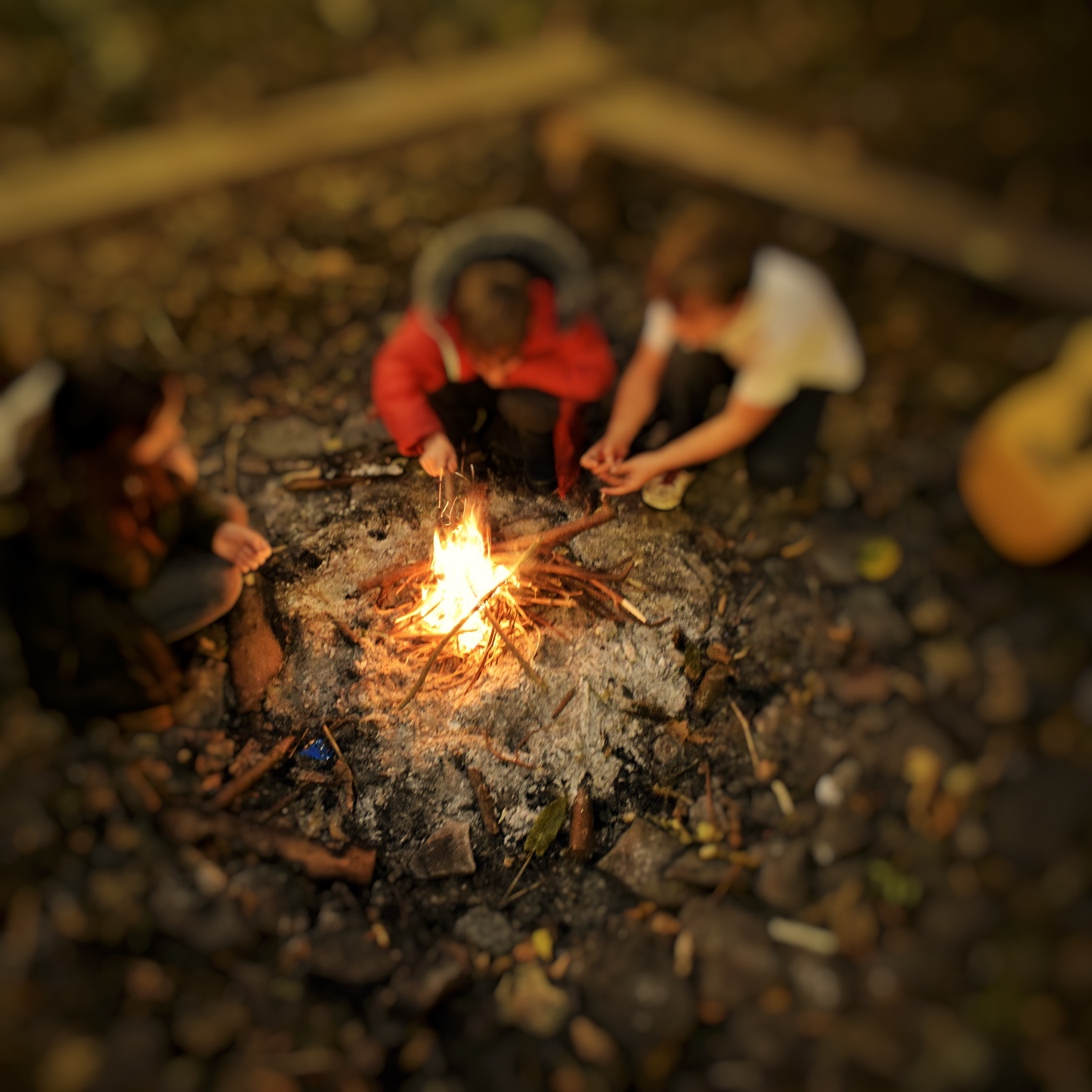 At the end of September we sat way up into the night drinking wine and making plans. The conversation started with the kids and the hypnotic hold of the screens and how, now that autumn had settled in we would draw them out into the wilds with the ever present lure of fortnite in the house. We started putting together a list of ideas for getting the kids enthused with being outside, that wasn’t the dreaded, dragged along, heels in the mud afternoon walk. We ended up with a tangle of ideas and inspiration, some using our tents as a starting point others just about being in the wilderness, but each week getting out there in the woods and fields and swamps and mud. We are going to call it ‘The Lotus Belle Wild Child Project’.

As the days get colder using the tents as a base for our excursions and explorations makes real sense, as winter sets in we will be using a larger tent, perhaps set up more permanently with a burner installed to make a cosy winter space.

We want to be outside with the kids as much as we can, we want to explore nature with them and learn together and from each other. There is something special about being in the wild under canvas, just that curve of fabric and wood between you and the sky, the earth, the wind. Being able to hear the natural world around you. 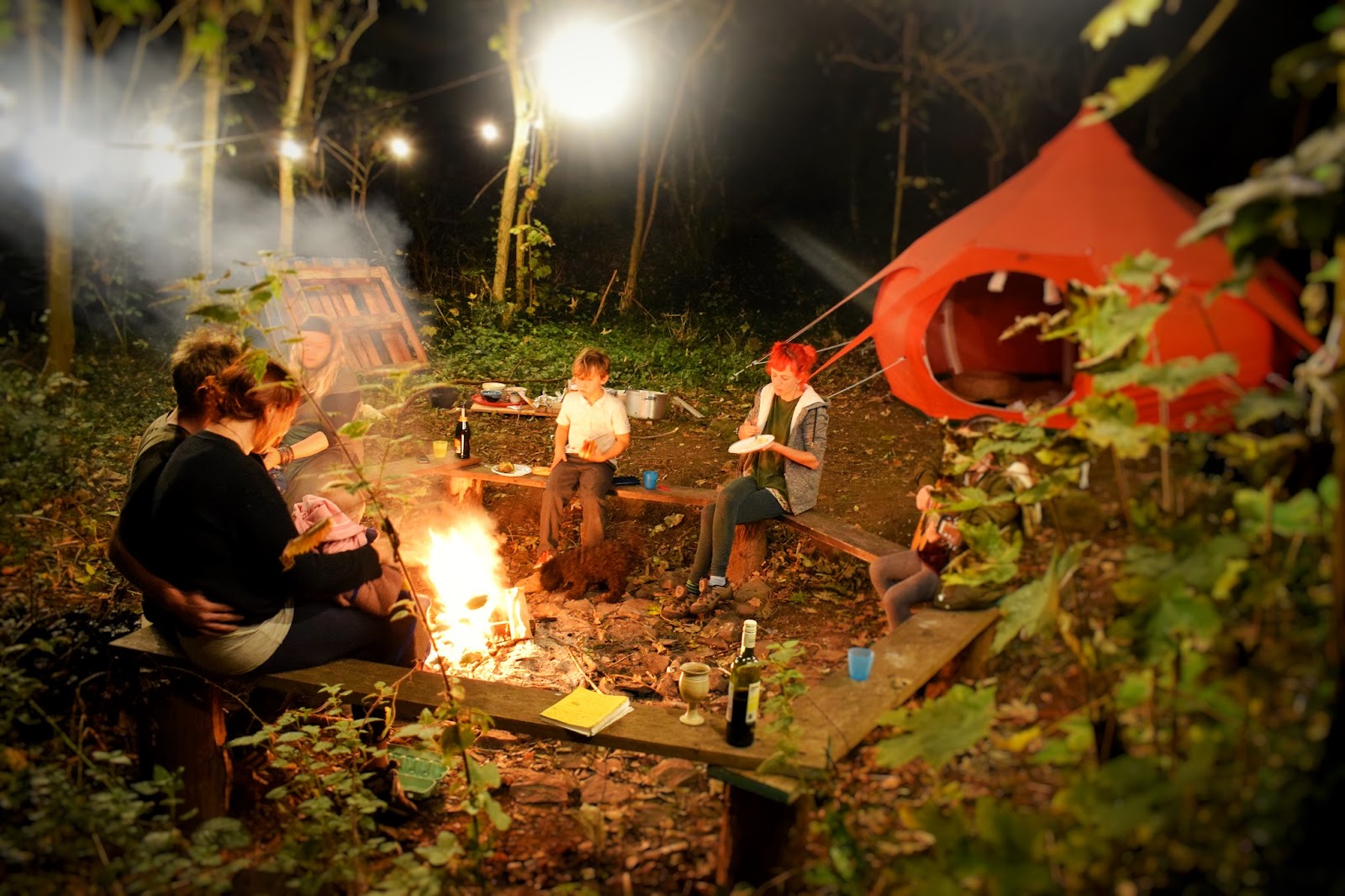 One October night we loaded up the wheelbarrow with hordes of potatoes wrapped in tinfoil, packets of sausages, bread rolls (immediately flattened and inexplicably soggy by the time we got to the woods), and a precariously balanced bowl of cake mix and told the kids if they wanted to eat that night they had to come and cook it themselves. There was an immediate and indignant round of ‘whaaaaats?’ Didn’t we know it was their night to be on the computers, this wasn’t fair at all. We didn’t care, cruel and heartless as we are. Wellies were dragged on and everyone stomped their most disgruntled of stomps up to the woods, while we pushed the wheelbarrow and cheerily extolled the virtues of the outdoors. We had already pitched a Lotus Belle Air Bud tent earlier in the day and filled it with blankets and sheepskin rugs. The bell tent in amongst the trees, hung with fairy lights did look pretty, if not enchanting. The small grumpling ones were drawn in despite themselves. The baby was deposited in the Lotus Belle tent and sat looking for all the world like a fat little satsuma watching all the activity with an eye on escape. The bigger children were sent to gather kindling to start the fire. J spent an excessively long amount of time gathering the smallest and straightest twigs he could find and returned smiling smugly with them packed neatly in his fist like a set of pick up sticks. He gave the ramshackle collection of kindling gathered by the rest of us a condescending look, poor inferior kindling collectors we obviously were. ‘Come on’ we called at the small hunched over figures weaving their way through the quickly darkening woods. ‘The sooner we light the fire, the sooner we can eat.

Hari had pockets full of lint from the dryer she doled out to the children, like scraps of dusty, moth-eaten fur. They squatted around the unlit fire and in the peace of the woods, with the beautiful tent lit up with small sparks of light, us adults looked at each other with pride. What a picture we all made. Then the screaming started. ‘He stole some of my lint! Now he’s going to have more turns than us!’ Hari produced more lint from her pocket, ‘calm down, there’s plenty of lint for everyone.’ They snatched it like so many crouching gollums, ‘my precious lint.’ Getting kids to light a fire with some lint, flint and steel, is perhaps one of the most satisfying activities you can do, mainly because watching them fight over dryer dust made my week. They took turns with the flint and steel, striking sparks into the lint and building in front of them a small fire. The lint catches the sparks from the flint well, much more quickly than you would expect little licks of flame sprout up and with sticks the kids push the burning lint into the laid fire. And then a warm peachy glow is lighting up the small faces huddled around their creation. They are pleased with themselves, they whoop and scatter into the woods to find some long pointy sticks to cook the sausages on. 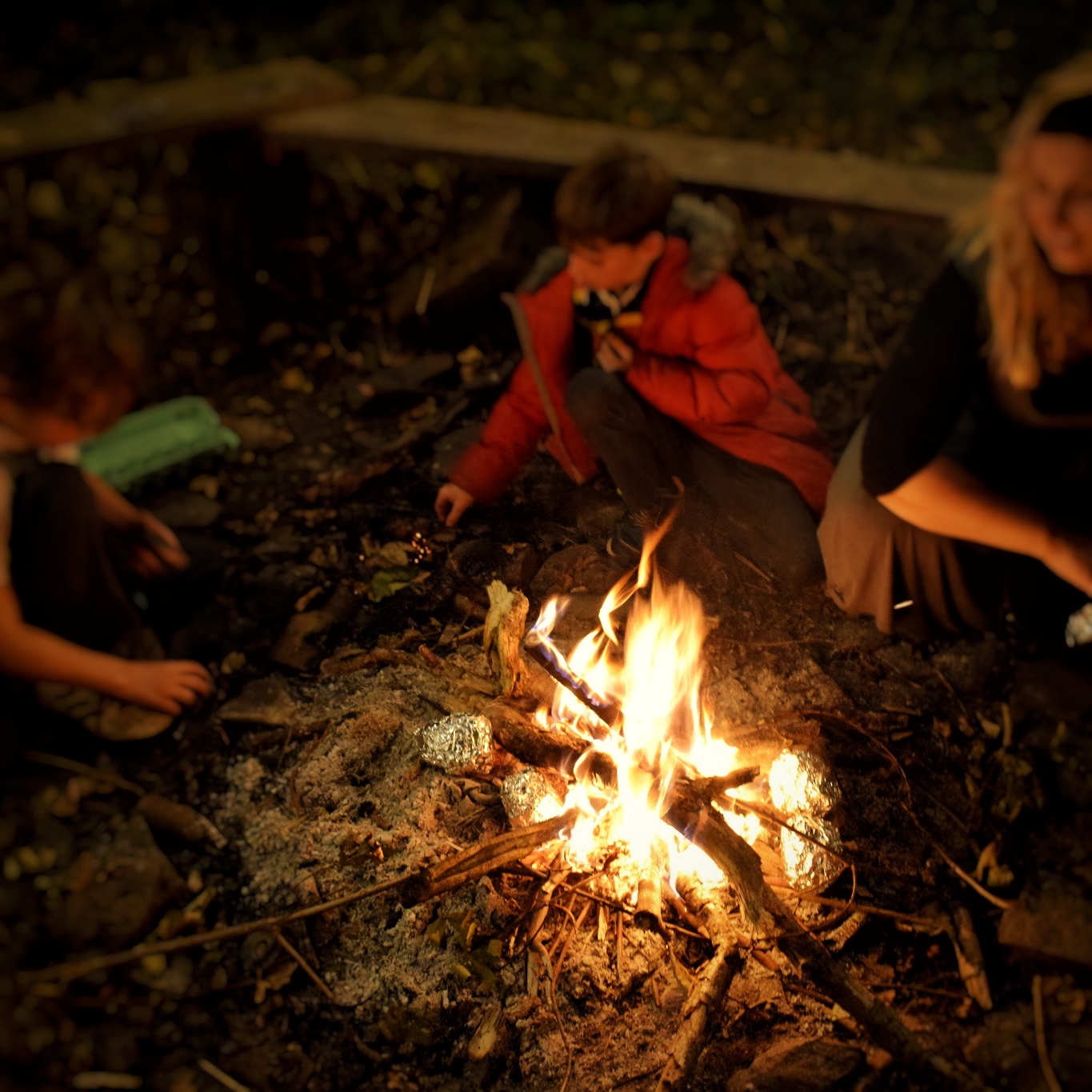 FOOD ON THE FIRE

We wanted to keep things as simple as possible. Everything we ate that night was cooked straight on the flame and all the kids were in charge of their own food. We wrapped up potatoes and sweet potatoes and cooked them in the embers then ate them in their foil wrappers with plenty of butter. Sausages skewered on sticks and toasted (or well blackened) brioche buns.

There is a certain nostalgia in fire baked potatoes, burnt on the outside, near raw in the middle, but if you want to speed things up and have perfect fluffy potatoes I would slow cook them in the oven first wrapped in foil then take a bundle of them with you to the fire. We did a frankfurter cheat with the sausage course of our fire lit dinner, mainly because the kids gobble them down like crazy and being already cooked there was no danger of the impatient eating of half cooked sausages. 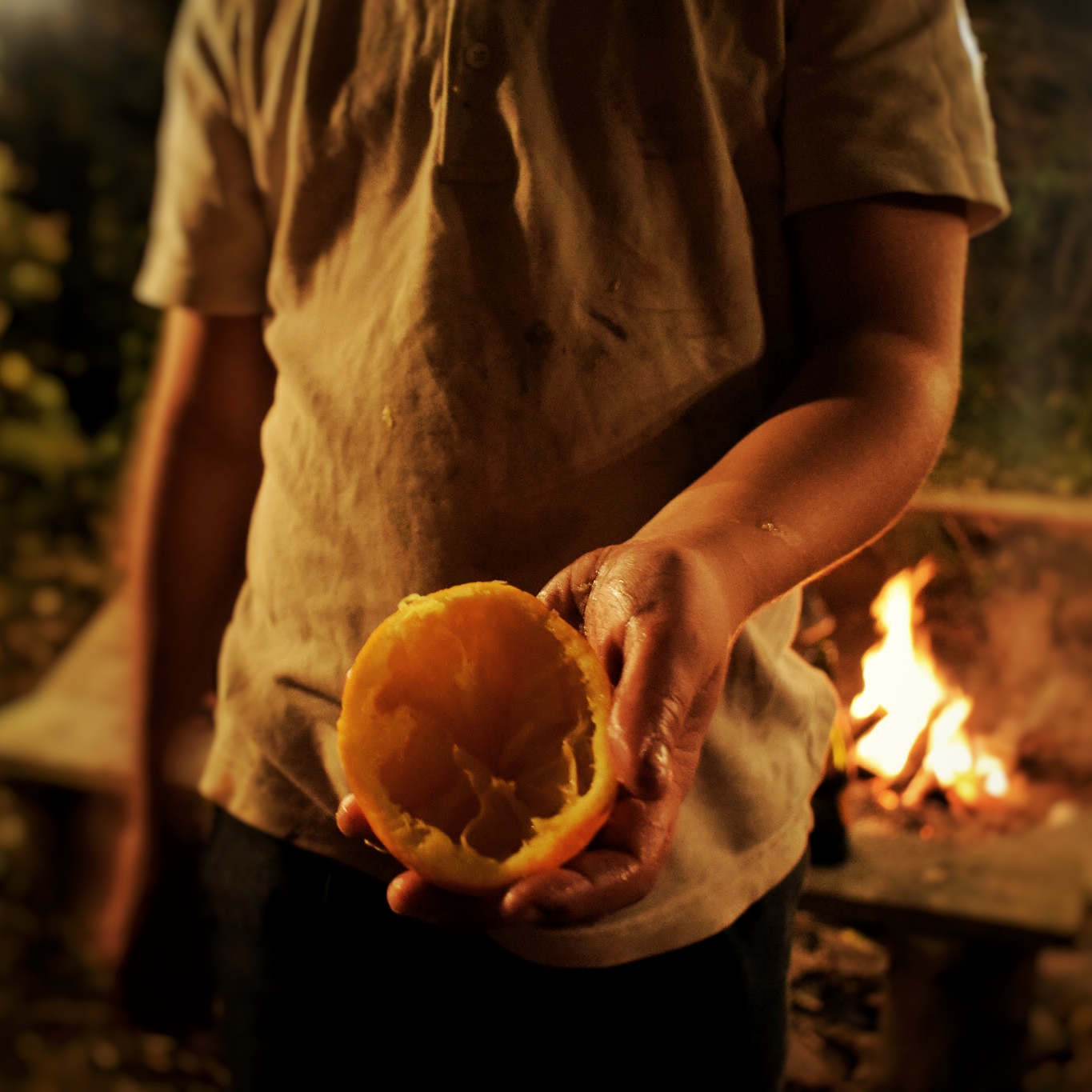 These were the biggest success of the evening. A simple thing that turned out pleasingly well. We made up a simple muffin mix in advance, loaded with pieces of dark chocolate. The nice thing about this recipe is that it’s so simple to make, and it’s happiest made in advance and left in the bowl to rest. Around the fire we handed out oranges and covered ourselves in sticky sweet juice hollowing out the skins. One half of the orange skin is filled with the muffin mix, then the empty half is put on top and the whole thing wrapped in foil. Some of the firecakes were placed carefully on the embers and some thrown straight in the flames, then we waited, jabbing them with sticks occasionally to turn them. Some came out in classic fire cooked style, blackened without, raw within. Some partly cooked, and gooey in the middle, and one glorious firecake, cooked perfectly, rising golden and steaming from it’s orange skin shell.

▲ Enough large oranges for everyone, the mix will make around 10-12 firecakes

Mix together all dry ingredients and the chocolate in a bowl. Melt the butter and mix together with milk, vanilla and eggs. Pour the wet mix into the dry and mix until it is only just combined.

You can leave the mixture to sit quite happily for hours. Cut the oranges in half and scoop out the flesh. By the fireside this can be a bit of a tricky and sticky job, so for ease you can squeeze the oranges first for juice on an orange squeezer. Fill one half of the orange skin with mixture, put the other empty half on top to form a whole orange again. Wrap the firecake in two layers of foil and cook on the embers of a campfire.

We stayed in the woods until just about past the kids bedtime. No one wanted to leave the fireside, where the flames cracked cheerily and an abandoned firecake burst and oozed through it’s foil case. We had to drag the kids back out of the woods we’d had to drag them into, all smelling of woodsmoke and a bit more wild than usual. But then, that was the plan all along. 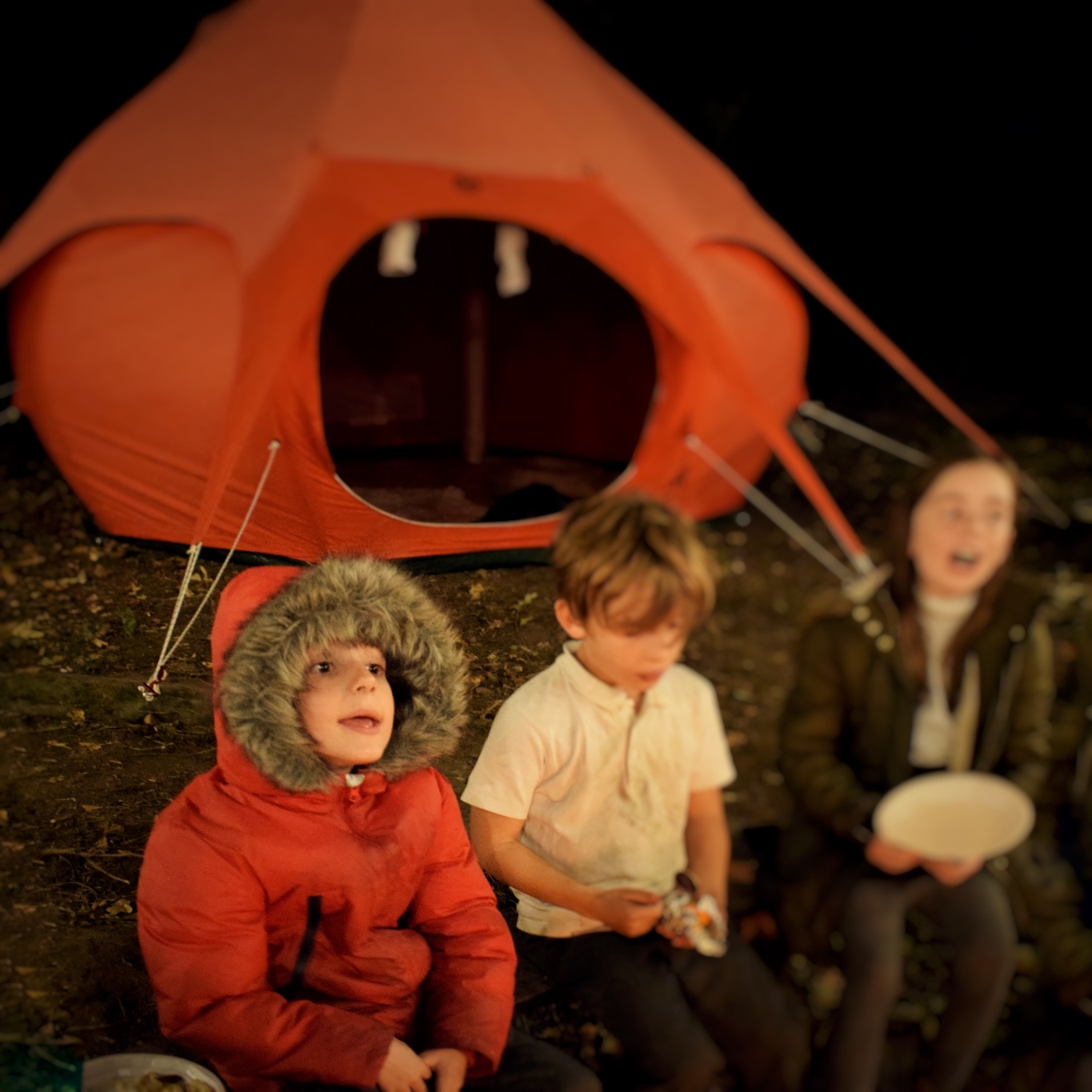