Stargazing and camping in the UK: a guide

Camping in the UK during lockdown calls for socially-distanced places in which to pitch up, so we’ve naturally found ourselves regularly taking our Stargazer tents out of the city and watching the night skies through its transparent roof.

We’ve been keeping a watchful eye on the calendar to check for space events, trying our hand at a spot of astrophotography, and using apps to teach the youngsters about constellations.

Here are ten things we’ve learned on our stargazing camping trips over the past few months!

The Perseids meteors are the headlining act in July

Between 17th July and 24th August each year, we keep a keen eye for the Perseids meteor showers. These are known for being some of the brightest meteors all year round. Who knew bits of rock burning up in the atmosphere could be so pretty?

They’re due to peak around mid-August. Check the lunar calendar for when the moon is in its crescent (‘least full’) phase, as there’ll be less natural light pollution. Also, look out for fireballs (extra-bright meteors). 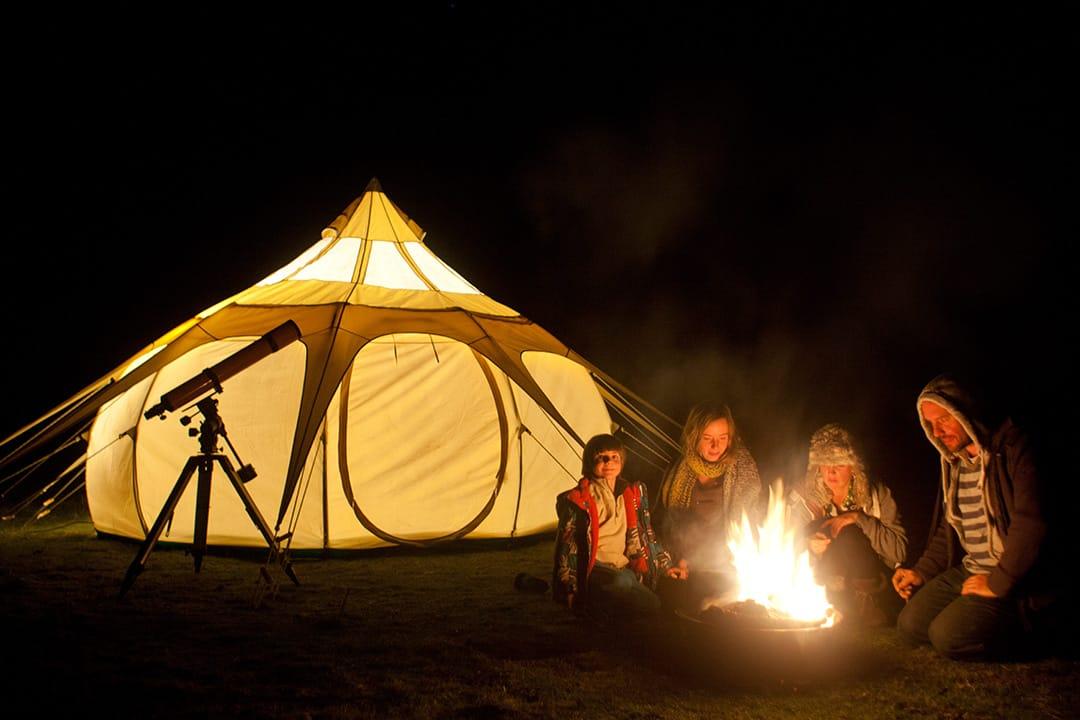 Stargazing apps: sat-nav for the stars on rainy nights

There’ve been a few nights where the weather’s not been too kind, and though our Stargazer tents are water-resistant, the transparent panels in the roof don’t have windscreen wipers (yet). That’s where stargazing apps save the day (well… night).

A decade after its release, Star Walk (on Android and iOS) is still going strong, overlaying maps of planets and constellations on top of your smartphone camera’s image. Always awe-inspiring, and it’s helped us memorise stuff for when the night skies clear up again.

Take a powerpack to keep everything charged up.

What to spot with the naked eye (without beer goggles)

When you’ve used apps to memorise constellations, it gets way easier to find stuff. We’ve planned a few outings around ‘oppositions’ — when planets are most opposite the sun, and illuminated the brightest. Jupiter’s is typically around the middle of July. Saturn usually follows a few days later.

Something we’d never previously considered: booze inhibits how your eyes adapt to the dark. Wait until you’ve spied some planets before cracking open a cold one and lighting the stove to cook some midnight snacks. 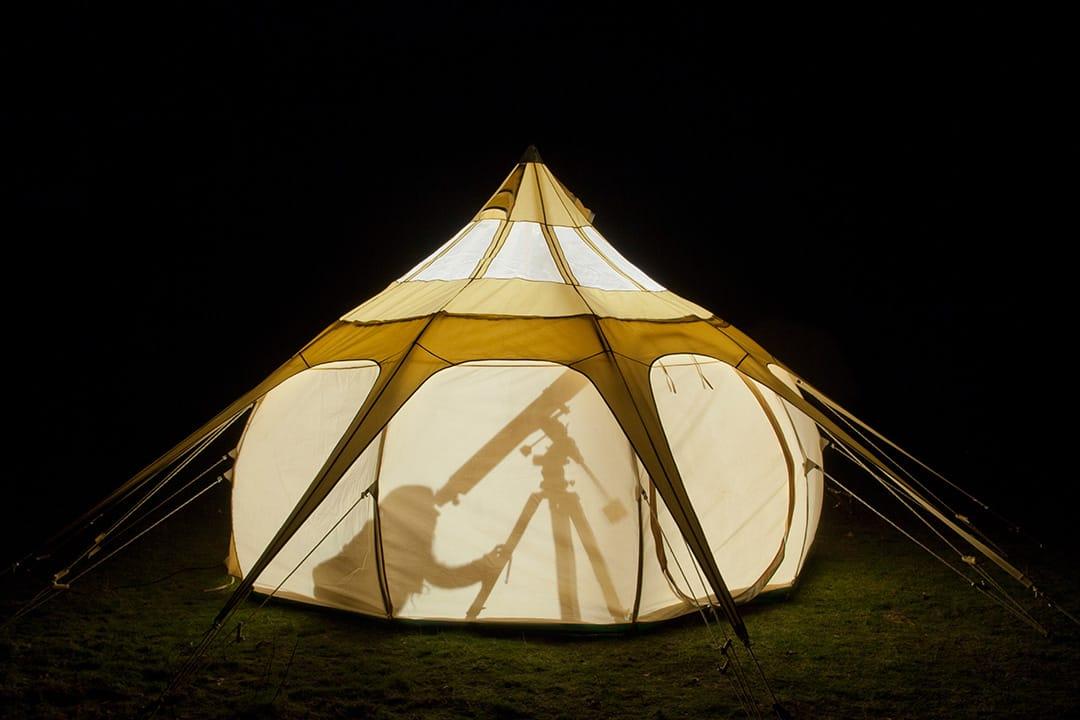 Spot the station: looking for NASA’s home in the sky

While we’re talking naked-eye stargazing, NASA’S International Space Station (ISS) can be spotted passing overhead almost nightly, if you know to look for. Check spotthestation.nasa.gov, pop in a postcode near your camping spot, and prep for a sighting.

Spot Starlink (while you can)

SpaceX’s chains of Starlink satellites were built to bring Internet access to the most remote corners of Earth, and only recently started going into orbit over the past five years. We’ve used findstarlink.com to know when to see it from where we’re pitching up.

This is a bit of a temporary one. Some of SpaceX’s more recent Starlink launches have special shields which make them less reflective and harder to see. Astronomers got a bit miffed that the satellites kept interrupting their work. 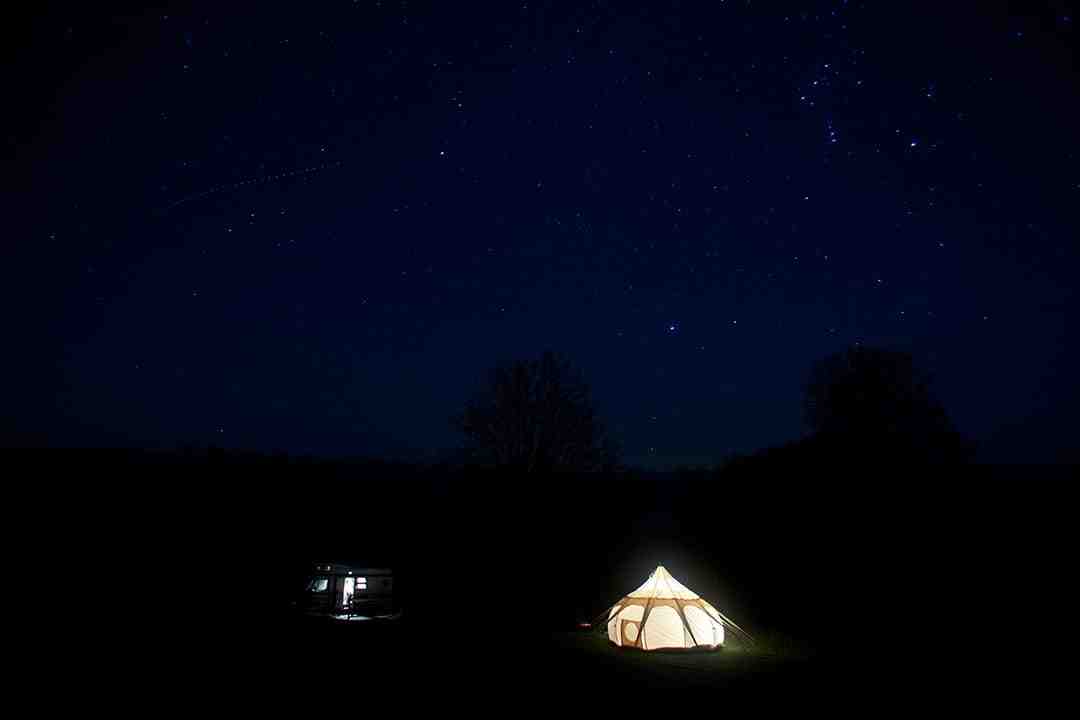 Most nights, we‘ll have a telescope looking up through the Stargazer tent’s see-through roof and a pair of binoculars on the table beside the entrance. The telescope has stronger magnification, so it’ll see further and focus more sharply on fine details and textures.

The binoculars are for when we spot something with the telescope and want to roll up the insect mesh and run outside to follow its movement towards the horizon. Binoculars feel more natural for this. Not quite as long-range, but using both eyes gives a deeper, more 3D view than the telescope.

It all comes down to what you want. Telescopes take less effort to hold, and give a superior image. Binoculars are more mobile, feel more natural, and are fun to pass around!

Every time we check astronomy blogs for info on what to look for on our next trip, we see those mind-boggling nighttime photos of light trails filling the sky. It turns out that taking the first step towards snapping pics like those isn’t too much of a challenge.

Any digital camera with a ‘Manual’ mode will let you dip your toes in the pool of astrophotography. You’ll just need to know a few terms:

Covering these basics puts you on the road towards taking hours-long exposures like pro astrophotographers. We’re quickly finding it to be one of our favourite ways to remember our stargazing camping trips. Be sure to take a powerpack to keep everything juiced up. 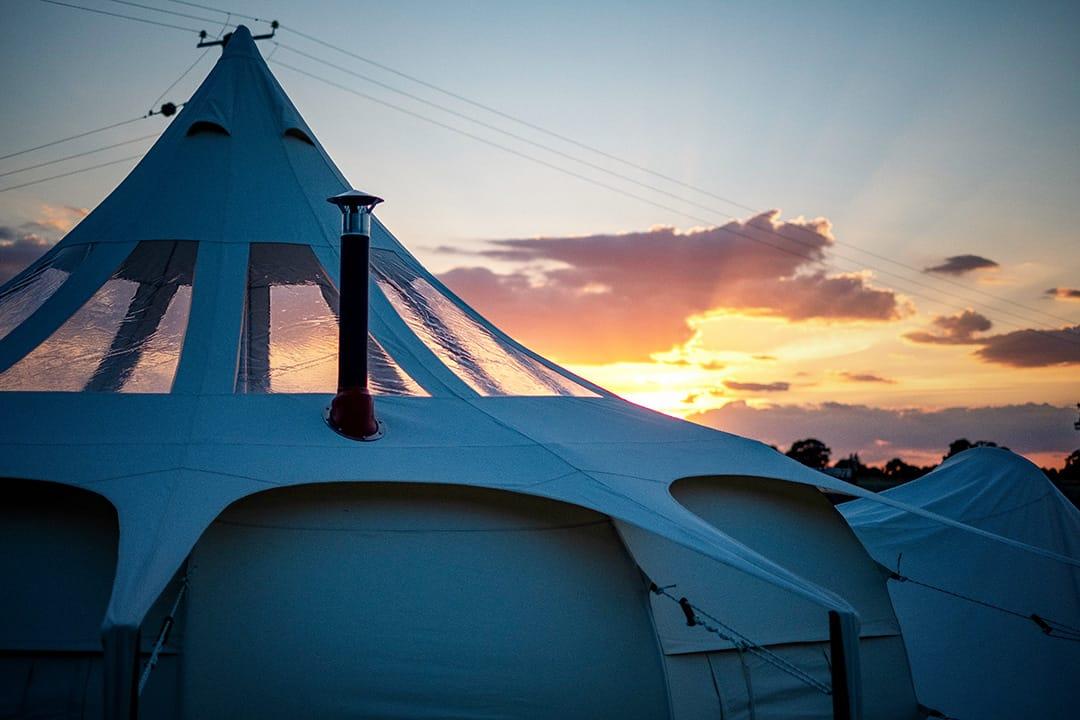 Use the sun as your alarm clock

Our stargazing trips are always planned for nights when we don’t have to worry about getting up the next morning, so we’ve been enjoying one of the side benefits of the Stargazer tent’s transparent roof. Waking up naturally when the sun rises and starts poring into the tent is the perfect way to start the day. It’s almost like the sun is saying, “hey, I saw you ogling the moon last night. We need to talk.”

Stargazing camping trips have been some much-needed therapy at a time when the darkness of the news cycle has been quite relentless. No hobby is as perfect for ‘getting away from it all’ as searching for planets and stars, and it can be done while staying safe in line with social distancing rules.

And, with current restrictions beginning to lift and UK staycations starting to feel within reach again, planning the first post-lockdown week away around stargazing seems like an ideal way to ease back into normality.