An Interview With Moat Island

We got the chance to sit down with Lewis, Co-Founder and Manager of the popular destination glampsite Moat Island, in Norfolk. Since opening in 2015 they’ve been going from strength to strength, so we were lucky to catch them after a packed season!

How did the idea for Moat Island come about?

Roy and I were developing a property together, and when that sold, we found this little place on Rightmove and just decided to go for it!! We were actually on holiday and flew back from France and we just fell in love with the land. And just yeah, went for it. We wanted to do something that we enjoyed rather than just renovating houses, and we both like outdoorsy sort of experiences. It's just been so good to just create a place for people to enjoy.

When you saw the land did you think immediately of tents?

Yes, it was tents because we kind of thought right, let's just set up a camp! I kind of didn't know what we were doing to start with because I was all ‘just get some tents in the field and how hard can it be?!’ … We soon learned there was a lot more to the whole planning permission process and everything!

But it was just so exciting. It was great, it was just me, Roy, and my oldest friend Barney, who specialises in Landscape Architecture, working on the plans and designing everything, and we wanted to create somewhere better than the places we’d been where people just have their separate experience and feel like the camping equivalent of an impersonal hotel.

Everyone here has their own space but it still feels communal as well, and people can make friends. It's great in the summer when families come, and you can just see all the kids making friends, and you see all the parents making friends and drinking wine together.

Yeah! The best thing about my job is just the fact that I am involved in this memory making process for people, like, the kids forever will remember that cool glamping summer where they made friends and swam, forever. Which is really cool. A lot of job satisfaction, it is just brilliant. 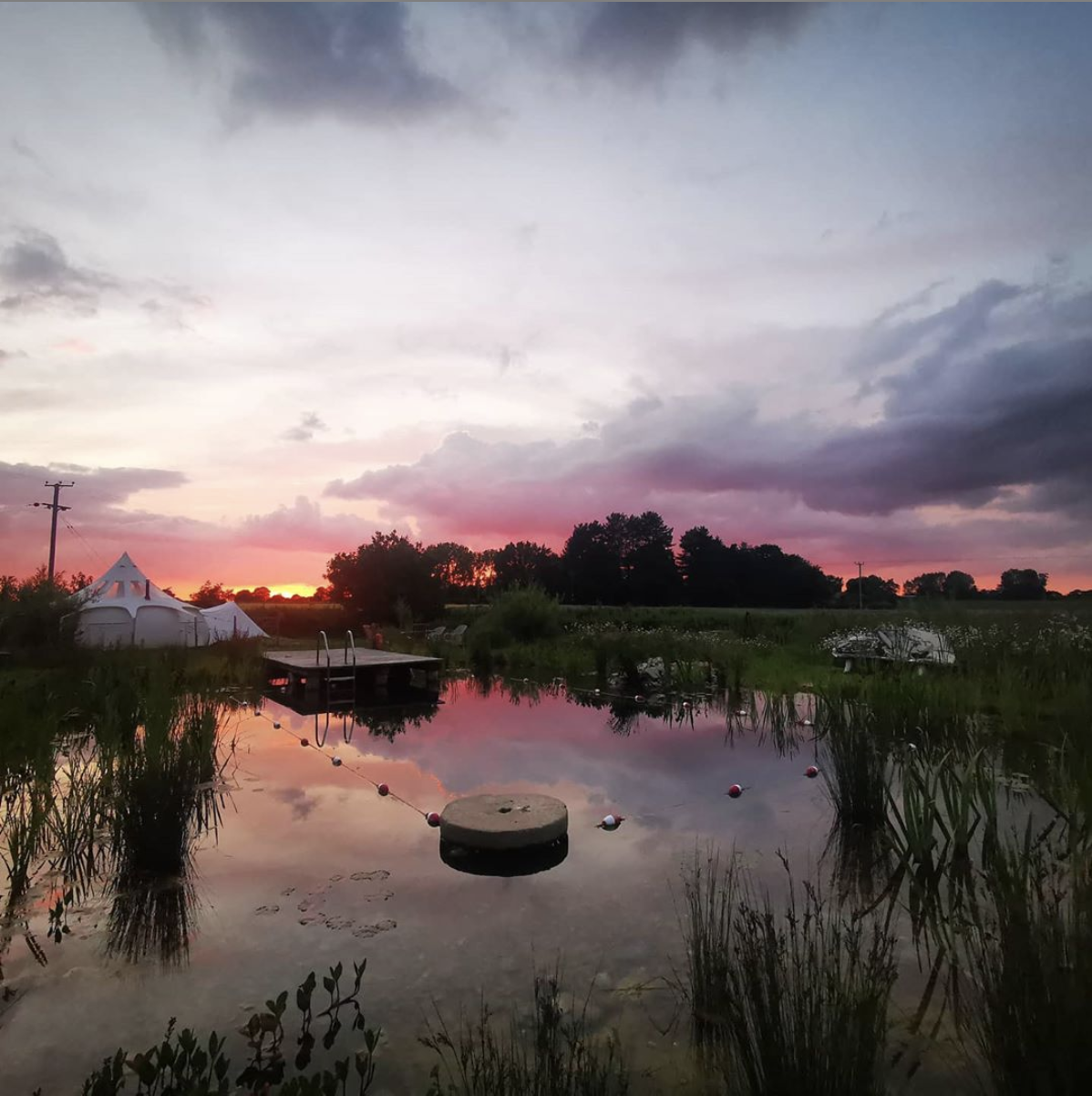 How did you choose Lotus Belle Tents?

We sorted out our planning permission as a priority, and we knew that to make the tents really happen we needed great showers and toilets, a kitchen, and sewage, and all the boring stuff. So we hadn't really thought of exactly what tents, but then we went to the Glamping Show and walked around.. wow! There's such a huge variety of things, but then we just saw the Lotus Belle and it was just like instantly we had to stop and have a proper look. They are great because you can stand up in them as soon as you get in the door and you can utilize all the space in there so much more easily. We like to have nice furniture in ours.

They're such a good shape, kind of like a fairy tale. Pretty quickly we just decided that we wouldn’t peg them into the ground but stretch the lines out to fence posts, and I love how they look that way.

Where's your favorite spot on the site?

I would say the 6m Lotus Belle Tent we call Oak, because all summer long you get great sunsets, and people don't really walk past your spot there, so it's quite private. Also the view is great from there as it’s right by the swimming pond as well. In the summer, that is just great because she's got a fire going outside and in the sunlight the water can get up to 29 degrees!

Sometimes you're watching a storm roll across the field while you’re in the pond. It's just like it's just so good...so, in summary, it's just amazing.

What big plans do you have for the future?

Now we've been going for a couple of years, we want to make sure it stays fun for guests and for us, and so I'd like to explore holding events here. I’ve been looking at the Lotus Mahal Tents for that, I think they look amazing, just absolutely awesome, and we have some spare roof protectors I’d like to set up in the woods to create more seating areas and chill out places.

I’m also thinking about hot tubs and a sauna!! I think that would be romantic especially for this time of year.

How has your season been this year?

Super busy! Even the two years before the staycation just got crazy, all peak we're getting fully booked almost straight away. 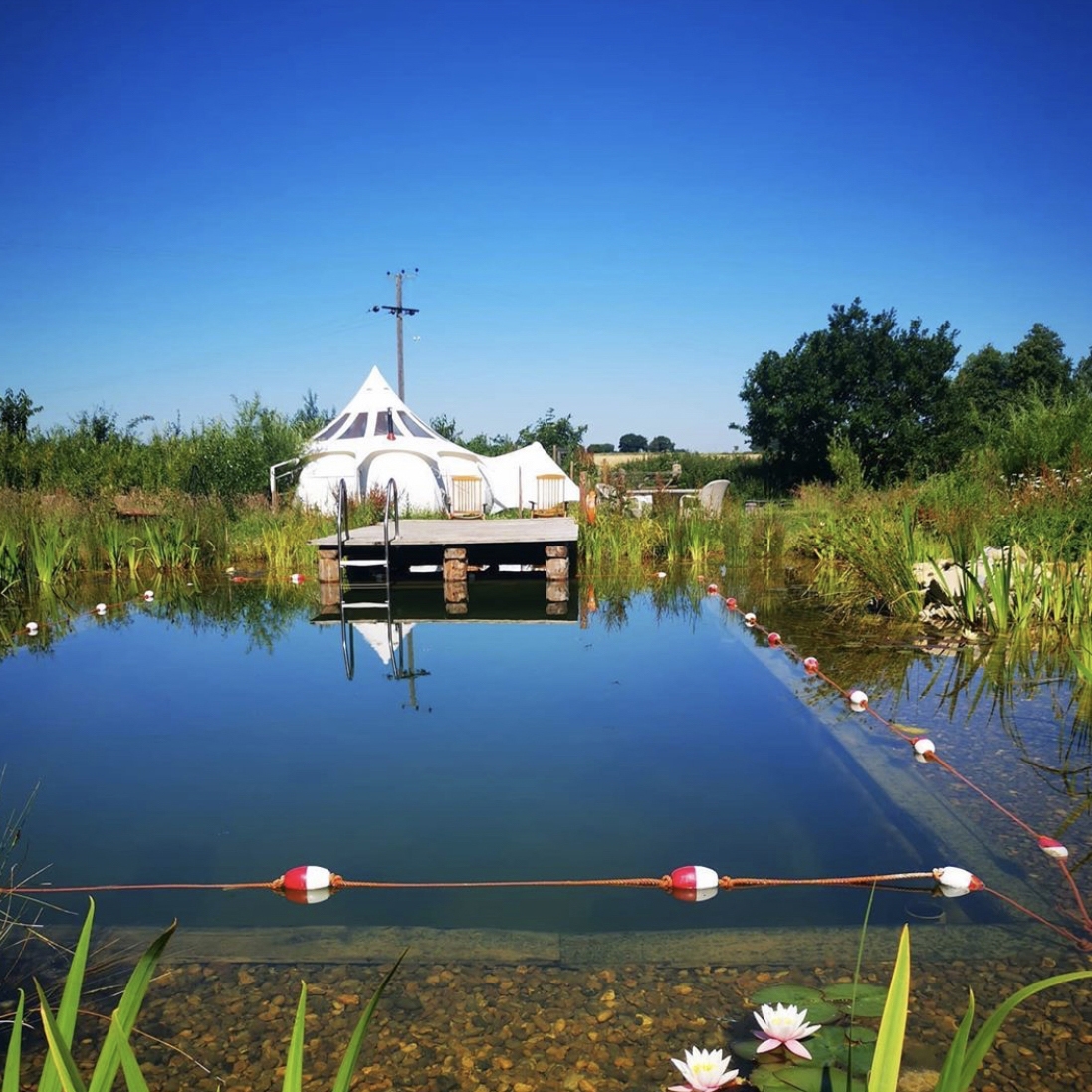 How big is the Moat Island team?

There’s me and Roy, plus our wicked changeover team of two, and I have a couple of friends who come and help me with the bigger building projects like the Castle which we finished this summer.

Which of your Lotus Belle Tents is your favourite, if you can choose?

You may be surprised but I prefer the insulated classic style to the Stargazers, as in the summer, I can get so hot. These insulated ones are just perfect because you walk in there in the summer and you notice it's actually cooler in there.

Plus, I love the texture of the lining. It's just like being in a massive duvet! I love the response from our guests, anytime anyone walks into one, they go, ‘Wow, like it's just a big cocoon!’ Also, when you see that lining, it just instantly feels fancy.

Has owning and running a glampsite made you more picky about where you stay when you do get away?

I think so. I’ve done a lot of traveling around. We camped out and went to festivals and stuff when I was growing up. I then built my camper van and got into festivals and I also traveled around Europe and got so used to my comfy bed… that I suppose that’s why I wanted to make that dream real, of making it comfortable for people.

You can just wake up in the morning and be ready to have a nice day, no stiff back or rain flooded nonsense.

And finally...if you could open a sister site to Moat Island, where would it be?

This is if I could be in two places at once?! I think in the south of France, probably in the foothills of the Alps. So that you can make it to the Mediterranean but still be up in the hills. And all the cheese and wine I can devour!

Thank you to Lewis for your time! If you’d like to book Moat Island Glamping you can click here to see availability. Don’t be afraid to book well ahead, this is an extremely popular site!