My previous experience of camping has been mixed, to say the least.

As a child I clearly recall long trips in overloaded cars, followed by hours of bad-tempered frustration as my father erected an enormously complex house-tent from yards and yards of aluminium tubing and lurid coloured canvas. Eventually we would all collapse, frazzled and sweaty into the sleeping compartment as night fell.

Then came the worst part.

Keenly aware that I was encased in a flimsy bag, zipped shut, that hung precariously from an insubstantial  frame, I didn’t sleep much. If I did, I would regularly wake, panic-stricken, from a claustrophobic nightmare. No matter how enjoyable the rest of the holiday was it was always marred by the same flawed and fundamental element… the tent. 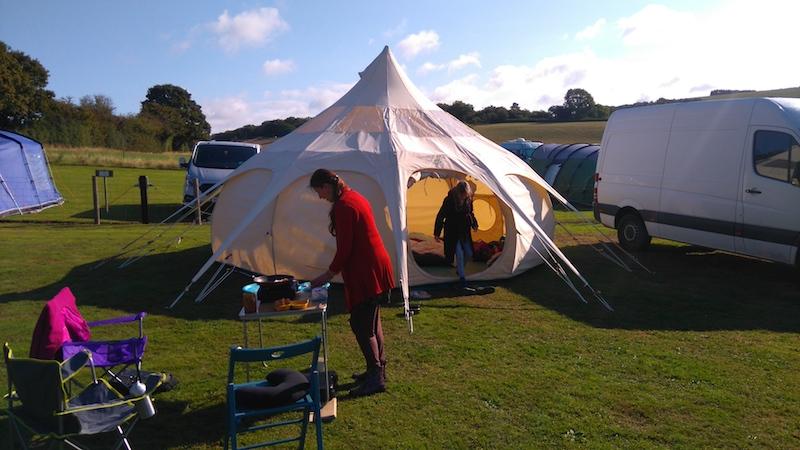 With that in mind, when my 10 year old daughter expressed a desire to go camping “in a proper tent”, I could foresee a problem. Although I am now 53 I have never conquered my fear of small spaces, so I started scouting around for a tent that would not leave me a gibbering wreck after the first night.

After several days of fruitless searching I was beginning to consider the logistics of transporting and erecting a circus big top, as the only apparent solution, when I stumbled upon an advert for a second hand Lotus Belle tent.

It instantly caught my eye, partly because of its eye-catching shape, a sort of mix of yurt and tipi, but also because of its sense of space. Rather than a threatening canvas cage designed to entrap me, the photos suggested a self-supporting canvas bubble, light and airy. I was intrigued.

After further research I found the company, and rented a 5m Stargazer for a long weekend away with my fiancée Emily and my daughter Freya. This would be my first holiday in a long time, so I had high expectations. 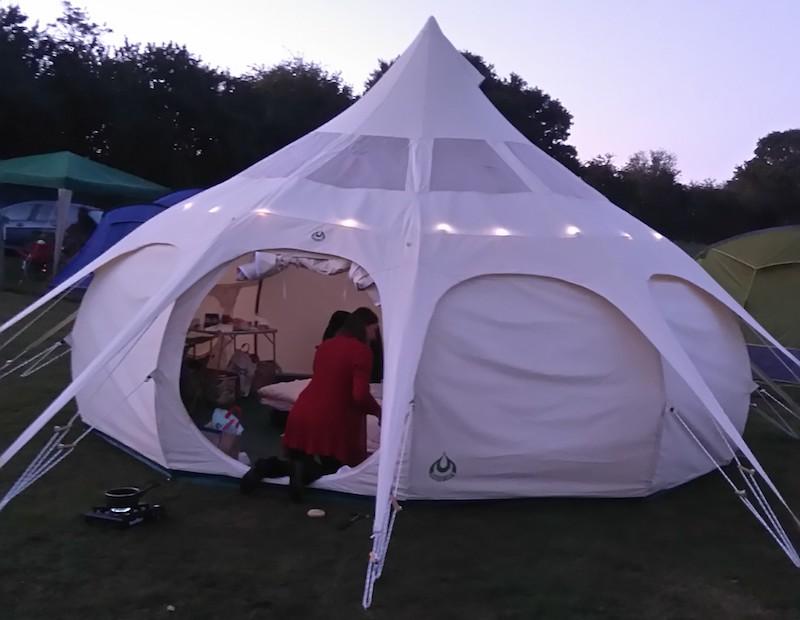 We picked up the tent from Bristol and drove through appalling weather and heavy traffic to the campsite in the wilds of Shropshire. On arrival, a fortunately timed window of dry weather allowed me to erect the tent, single handed, in only 30 minutes, using only the memory of the online instruction video for guidance. It was, as you will read elsewhere, remarkably easy. When it was done, I sat inside, the hero of the day, to survey my work, while Emily and Freya fulfilled their respective roles as home-builder and trainee ballerina.

Then, for the briefest moment, my claustrophobic demon raised his head to protest at being confined in a tent, but his complaints faded away almost immediately when he saw the sturdy construction, voluminous space and clear roof panels, through which the sun could be seen emerging from parting clouds. Further reassurance came from the fact that there were two doors and two windows, and that the walls were simply velcroed to the groundsheet, and the roof velcroed to them. Although everything was draught proof and snug it was not sealed in. It may sound inconsequential, but when you suffer from claustrophobia it is exactly these details that hold the irrational panic at bay. 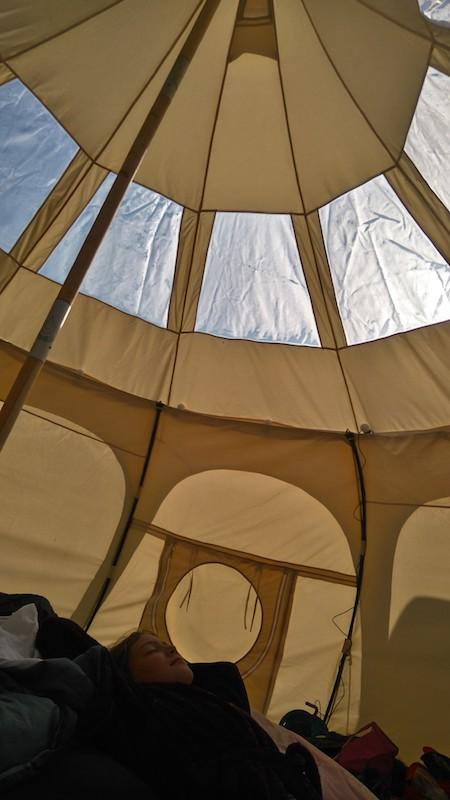 Our entire van load of bulky bedding, tables, chairs, cooking equipment, food and clothes couldn’t even manage to make the space appear cluttered, and when we finally settled down after a leisurely dinner  to sleep a few hours later, it was with smiles all round, and the sense that we were on a proper family adventure…with a healthy serving of luxury thrown in.

The shape of the Lotus Belle felt like a natural, instinctive design, more born of evolution than the designers pen, an elegant response to the need for shelter without detachment from the natural environment I came here come to enjoy. Lying on my back and looking up the centre pole to the topmost roof panels, I was reminded of the shape of a huge convolvulus flower. Indeed, the entire shape of the tent felt like it was drawn from nature, with no harsh straight lines, only gentle curves like the petals of a budding lotus flower… of course. 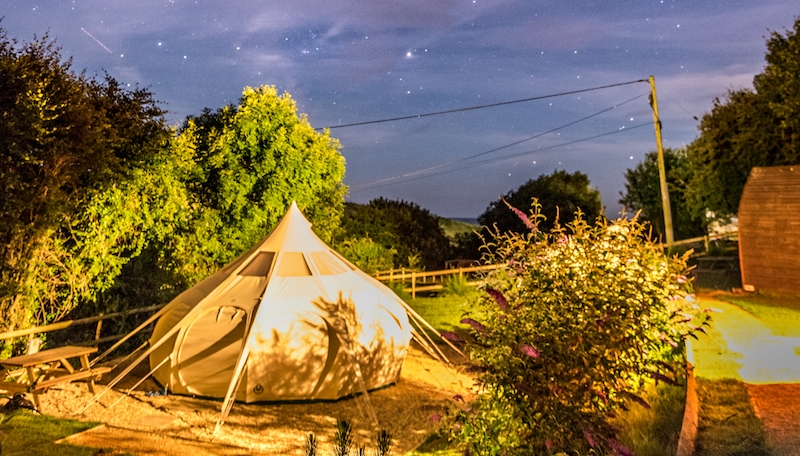 When I woke in the middle of the night the full moon was streaming through the clear roof panels, and I stepped outside to enjoy a peaceful moment communing the night. Under the perfectly round, pale moon the perfectly round, pale tent squatted in its landscape, at once part of it and distinctive within it, like a fresh new mushroom, emerging from the earth. Again it made me smile broadly, as it had before, and would continue to do throughout the weekend.

Later that same night, a sudden stiff breeze blew up out of nowhere. I could hear it advancing through the trees, roaring like a river. When it hit the campsite and started buffeting the square tents and awnings, they flapped and fretted like the sails of a ship. The Lotus Belle just purred and rippled, pulsing gently as its round walls shrugged off the wind.

On the second night, when Freya said that she hoped it would rain, just so she knew how it would sound on the tent, I agreed readily. Right on cue, the rain came, and that familiar childhood memory of feeling cosy under canvas came flooding back. It was with great warmth that I realized that Freya was feeling it too, and now she too had that experience to cherish.

When it came time to pack up for the return journey to Cornwall, via Bristol to return the tent, the Lotus Belle dismantled quickly and packed away relatively easily, again single handed, and again in 30 minutes flat. We had succeeded in having a camping holiday in comfort and style without any of the usual stress associated with pitching the tent, and just as importantly, not a trace of claustrophobia to mar the experience. 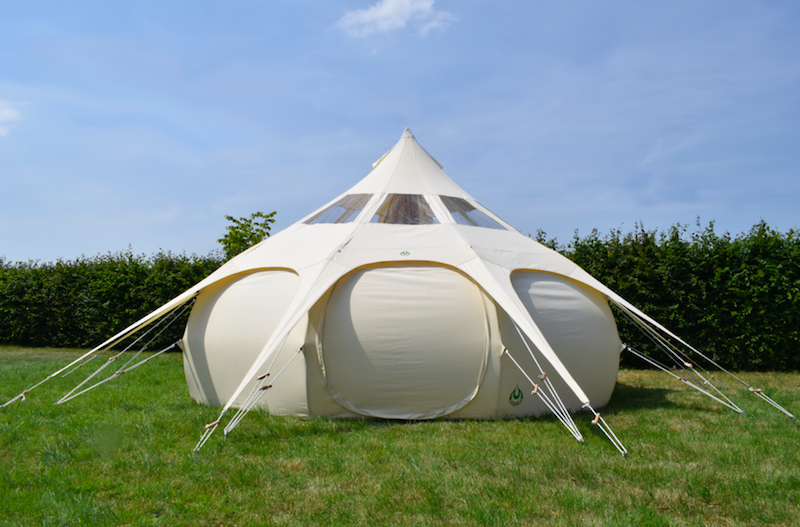 I love this tent.

I will buy one at some point soon, because now I am confident in my ability to take my family away for a camping holiday without problems.

Yes, it is heavy, reassuringly heavy, as it is made from high quality and robust materials. Even then a 53 year old sign painter can easily manhandle it in the 2 bags that it packs into.

Yes, you really need to pitch it in the dry, because of the way it is made, but you only need a 30 minute window of dry weather to do that, probably less when you have done it a couple of times.

Yes, it is expensive, but you truly get what you pay for with the very high quality of materials and manufacture. Of course, the head turning elegance of the design is also very much in its favour.

I have one word of warning for anyone considering hiring or buying one of these tents.

Don’t do it unless you are prepared for the realization that this is the one tent that you will want to keep forever. After a Lotus Belle, nothing else will quite match up to expectations. At least, that’s how my family and I feel about it.

Thank you, Lotus Belle, for redefining camping for me.