A Brief History Of Camping & Glamping

The very first man-made shelters would have consisted of foliage thrown over a stick frame. This basic idea for a ‘tent’ however quickly evolved into more sophisticated forms. 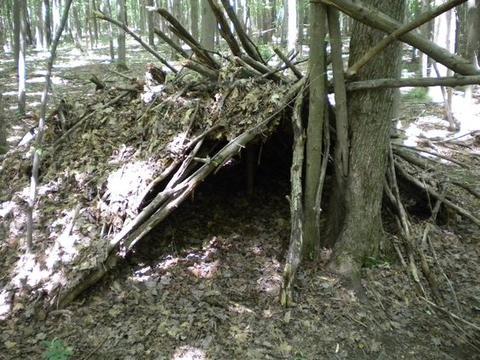 As early man walked north out of Africa he encountered increasingly challenging environments. The use of animal hides for warmth and durability became commonplace while the use of wooden or bone supports were invented with guy ropes made from animal hair and whittled wooden stakes for rigidity and to combat the elements. 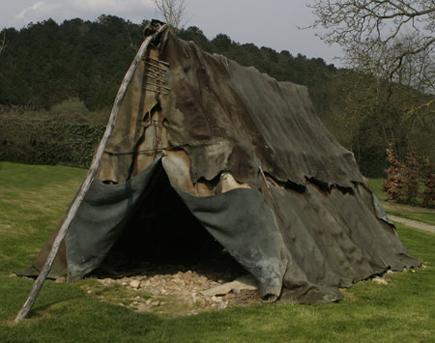 Tents were very much a place to call home for millennia, however, with the advent of farming, more permanent structures became the norm for living in, though tents were still used by traveling armies and nomadic tribes. 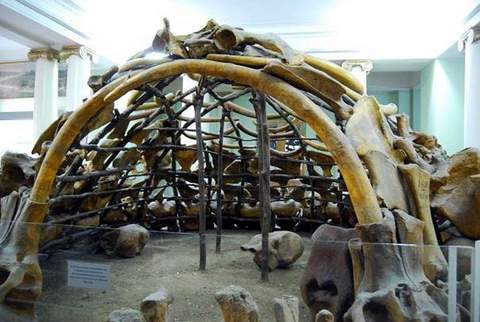 In ancient Siberia, tribesmen would herd sheep, goat and yack across the harsh frozen tundra. They learned to create an insulating fabric by layering sheep’s wool, sprinkling it with water and working it into felted mats. The word for ‘nomad’ actually comes from the local word for felt. So the nomads were literally ‘felt people’. 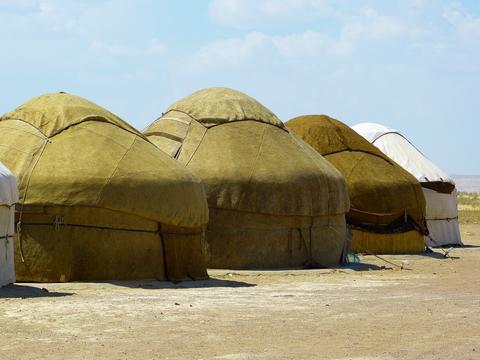 These tribes famously invented the Yurt style tent or ‘ger,’ (pronounced g-air) which was a semi-portable design that allowed for comfortable survival in extreme environments.

Struts made from saplings were fastened onto a central wooden ring and fixed round the top of a circular lattice wall. This structure was then covered with the felted mats. When it was very cold extra mats could be added, while during the hottest summer days sections could be removed to allow for airflow through the space. 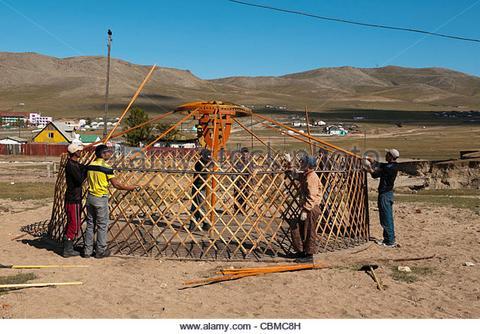 Knowledge of the Yurt spread during the infamous rise of Ghengis Kahn in the 13th Century. Nowadays this ancient nomadic shelter is very popular across the west in a huge variety of ancient and contemporary forms. Yurts have a wonderful earthy simplicity about them providing a great option for shelter that is relatively affordable, accessible and gentle to the earth. The materials used and the shape of the Yurt were important to the nomads, who believed in finding balance and harmony between man and nature, and of the worlds above and below. The circular shape of the Yurt represents the unity and interconnectedness of all things. 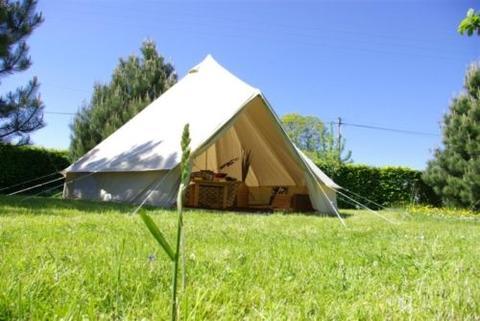 The first appearance of bell style tents can be traced to the armies of Byzantine Emperor, Maurice in 582 – 602 A.D. However, the most notable bell style tent in recent history was the Sibley tent. Henry Hopkins Sibley invented the Sibley Tent in the mid 1800’s. It resembled a Native American tipi with a smoke hole at the top and a fire pit in the centre. Whereas the Sioux Tipi required 12 poles to form a tripod, the Sibley design needed only one telescopic central pole, and required no guy ropes, as it was secured to the ground around the base of the canvas. 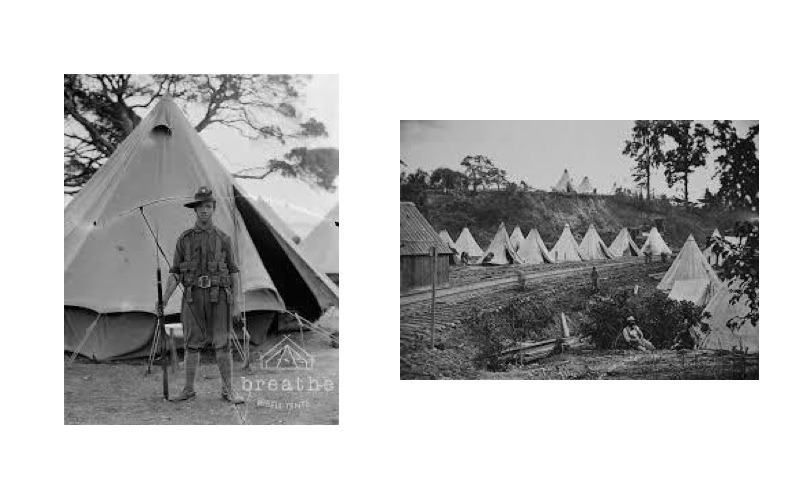 This design vastly reduced set up time, weight and therefore improved portability, which proved hugely advantageous. During the American civil war 44,000 Sibley tents were produced and used. Sibley registered a patent for his design in 1856 and should have made a fortune, but he never received a dime in royalties following his resignation from the army. 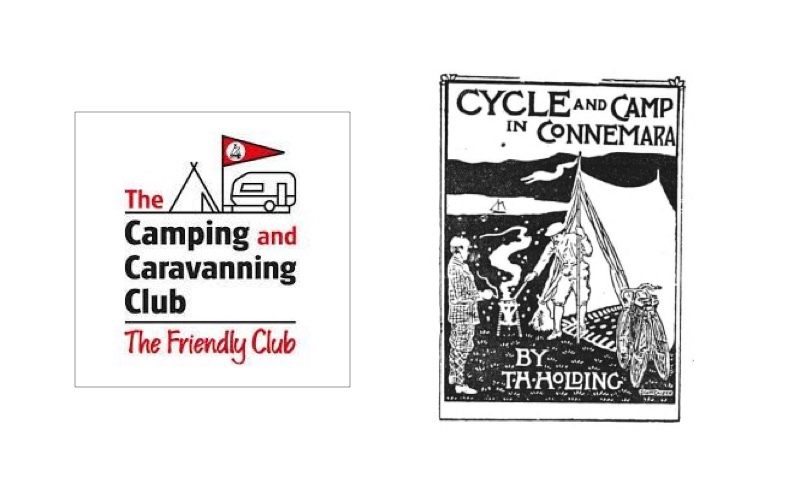 The idea of camping as a pastime has been around now for just over 100 years. Thomas Hiram Holding is believed to be one of its first proponents. Holding was a keen cyclist and wrote a book in 1898 called ‘Cycling and Camping in Connemara’ (in Ireland). In this he described the portable camping equipment he had designed and invited enthusiasts to contact him. This led to the formation of the Camping and Caravanning club in 1901, which today has over 300,000 members. 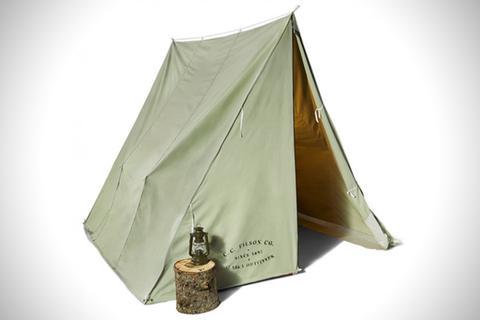 Various types of bell tents as well as the familiar wedge shape reigned supreme for decades. Then in the 1960s a plethora of lightweight, durable high tech materials were introduced with aluminium poles and synthetic fabrics. Camping became more and more popular with people realising the benefits of staying in a tent rather than a boarding house. Camping was far cheaper and camping equipment was improving rapidly so staying under canvas quickly established itself as a firm favourite amongst British holiday makers. Thousands upon thousands of campsites popped up all over the UK and Europe and modern camping was born.

With the rise of British Festival culture, modern tents made from nylon with flexible carbon fibre poles have been sold in their millions driving prices down further and further. Many are critical of this, as it has unfortunately led to a ‘throwaway culture’, with tens of thousands of cheap nylon tents being simply used once and left on site at festivals. In response to this trend, many festivals now offer pre-pitched tent packages including bedding etc, for people to rent. This has been dubbed Glamping (Glamorous-Camping), which we will be coming back to later. 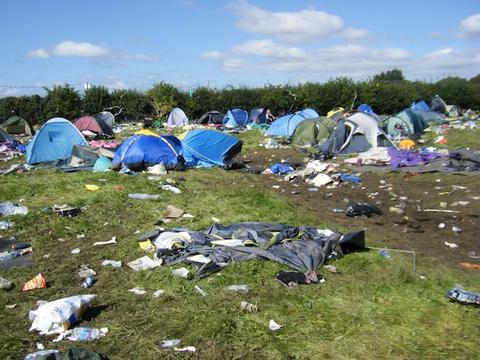 One tent you may well find advertised for rental at Glastonbury, for example, but certainly would never see left behind on site is the Lotus Belle. This design is a relative newcomer but is taking the market by storm. Essentially it is a hybrid between nomadic Yurt and Bell tent. It’s highly functional whilst maintaining an elegance and beauty rarely seen in tent design. The company that makes these carries the strap line ‘Tents for Life, not for landfill’, alluding to the fact that you wouldn’t dream of abandoning one of these beauties. 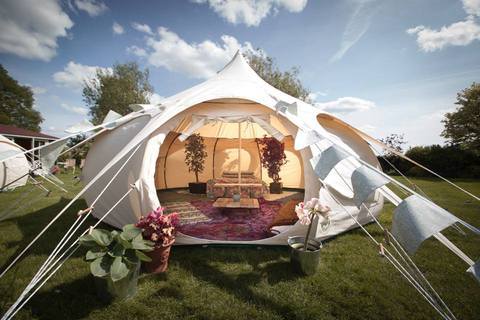 Harriet Seddon, Bristol, created the design whilst at Falmouth University in an attempt to fuse together the best aspects of Yurts and Bell tents. Her dissertation was titled ‘The importance of Circular space’. This resonates of course with the sacred Mongolian belief system. Her lecturers at the time told her that her designs for the ‘Onion Dome’, as it was originally known, would never amount to anything and the idea sat on the back burner for several years. Then in 2011 Seddon met a manufacturer of high quality bell tents who was overwhelmingly positive about the design and encouraged her eventually to invest her life savings in producing a run of 40 tents. Three years later Seddon has quit her teaching job and runs Lotus Belle full time with partner Ben and they’ve seen sales increase rapidly worldwide. 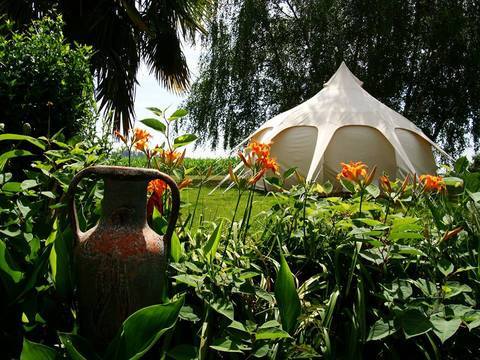 The Lotus Belle tent is constructed from the highest quality components with a high tech 360/380 gram canvas which comes ready with a premium water, rot and fire retardant treatment. The clever design boasts all the portability and usability of a standard bell tent whilst affording the roomy luxuriousness of a yurt.

With European holidays now growing pricier and potentially now less accessible, the great British summer holiday is making a huge comeback. Brits spend over 2.4 billion each year on domestic camping holidays with more now taking place in the UK than trips to Spain and Greece combined.

British landowners are realising the potential of this lucrative market by diversifying parts of their land for the setting up and running of a campsite. It is a simple process and many participants have seen their incomes rise dramatically as a result. 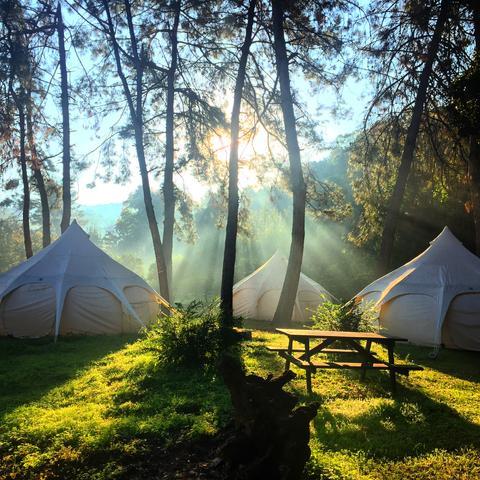 The Glamping business model is great fun to set up, and attractive to start ups, because it avoids the infrastructure costs of having to provide toilets, running water and power hook ups for tens of pitches. Starting off with just 3 or 4 ‘Glamping’ pods with an inexpensive composting toilet, revenues of 2 - £3k per month are easily achievable. Then it’s a simple case of scaling up as far as is comfortable. 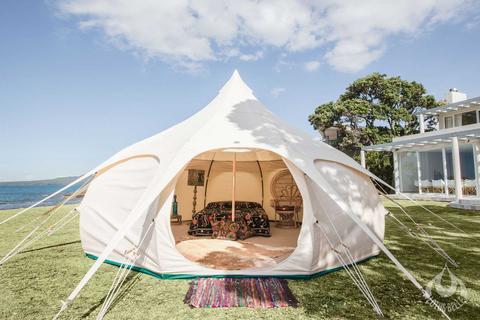 Glampsites in the UK have been using Lotus Belles since they first came to market in 2012 and are still going strong. With its novel design, durability and low cost it sells itself (looks great on a website!) A tent can pay for itself in a matter of weeks, but will last for many years giving a potential return of 20 or more times the initial outlay. 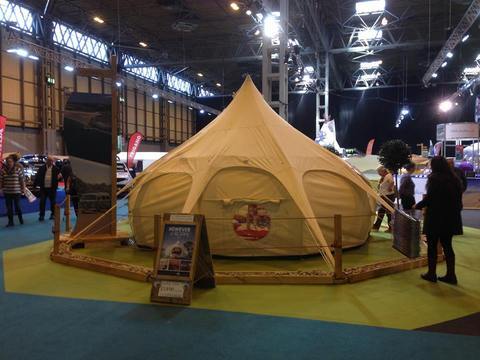 Lotus Belle Tents Ltd will be exhibiting at the Glamping show 2016 (stand OSA27) as well as the Farm Business Innovation Show if you’d like to meet Hari and Ben...and the tent… in person.